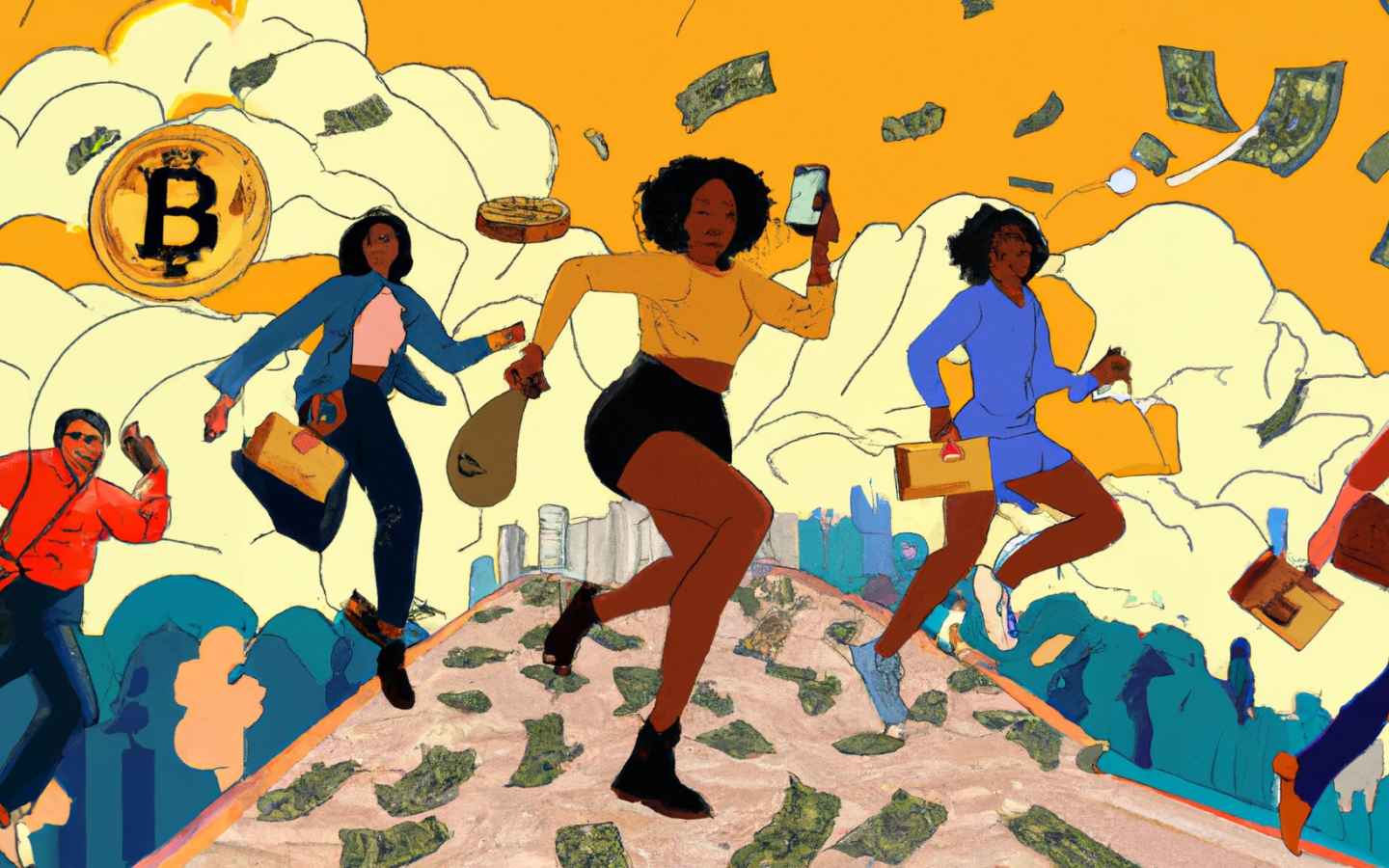 Why Self-Custody Should Be the Default in Crypto

I never thought the trigger to me writing this article would be Kanye West having his bank account closed. In recent years, events like Kanye’s have become more common in mainstream circles. Only last week PayPal added a clause that they can take up to $2500 from your account if they disagree with something you say online. Last year the Canadian government froze the bank accounts of protesters fighting for medical choice and the right to put food on the table.

This has drawn the usual crowd roaring “#Bitcoin fixes this” and the jeers from the proletariat that this doesn’t affect normal people if they don’t do anything wrong.

But while these events may be novel for most of us in the West, the seizure of money and assets has happened multiple times in countries like Brazil and Argentina. In these cases it affects the many, not the few. It’s a big reason why today it’s estimated that 10% of all US dollar notes in circulation are in Argentinian households, likely stuffed under the mattress. Self-custody, whether by crypto or traditional cash, is a way of life, a means to protect and control your wealth, and a core tenant of what makes crypto so powerful.

Many crypto commentators in the West argue that most people should only hold their crypto assets on an exchange as the risks of self custody aren’t worth the rewards. While in some countries with stable governments and currencies that may be true, the next billion users we bring on-chain won’t have the same privileges – and for that reason self-custody should be  the default not an add-on.

I’ll explain the tenants of the decentralization of money, why we should learn from past asset seizures, and how we scale self-custody to the masses.

The Decentralization of Money

The decentralization of money (often called the separation of money and state) is the core benefit of cryptocurrency and blockchain technology. However this concept has two core tenants:

The first is the one that grabs most of the headlines and brought many early adopters into the space. The birth of Bitcoin was perfectly timed with the events of 2008 and the Great Financial Crisis. It led to money printing and massive taxpayer bailouts of Wall St institutions, where those that took undue risk walked away unscathed while the global economy suffered. This spawned the idea of Bitcoin to decentralize the issuance of money, meaning no central body can control the supply of the currency. With Bitcoin only 21 million coins will ever be created and the issuance schedule through block rewards is set in code until the limit is reached, likely in the year 2140. While printed money was handed out to the people who arguably caused the Great Financial Crisis, this tenant is what converted many to crypto for the first time.

The second core tenant is the decentralization of custody, and it’s one that is often overlooked and sometimes dismissed, with many arguing that most users should stick to keeping their crypto on exchanges. The problem is that crypto exchanges are not too dissimilar from banks today, they are centralized institutions regulated by governments, either of which can arbitrarily lock you out of your funds. In the West that might seem foreign, but for the majority of the world it’s a common part of history.

Assets Seizures are More Common Than You Think

For many of us baptized into crypto by Bitcoin, we still anchor to the Zimbabwean story of hyperinflation, though other cases have happened within our lifetime affecting larger populations often closer to home. I admit that if it wasn’t for co-founding Minke with a Brazilian, I myself would have never known the history of asset seizures and hyperinflation that have happened throughout South America within my lifetime.

Many of these events followed the last period of high inflation in the US in the late 1970s and early 1980s. Like we are seeing today, the US was forced to hike interest rates to combat rising prices, strengthening the US dollar and triggering the start of currency crises globally. In the Americas this was known as the Latin American Debt Crisis where many countries including Brazil and Mexico were at the brink of default due to unsustainable amounts of dollar denominated debt..

I highlight Brazil here as not only is it the 7th largest country globally in terms of population, it’s also the 7th largest in terms of cryptocurrency adoption and the largest by volume in Latin America. At the start of the 90s, hyperinflation was running rampant in the country at 84% a month and grocery stores were changing their prices 3 times a day due to the crisis.  In response the President at the time Fernando Collor de Mello froze the bank accounts of every Brazilian for money over $1250. Withdrawals from money market funds were also limited to $600, or 20% of an account, whichever was greater. The plan left citizens penniless, threw the economy into chaos, drove companies crazy and caused one of the worst recessions ever in the southern hemisphere.

After 2 new currencies and some novel experiments, Brazil eventually recovered. However the recency of the scars still haunt many to this day. Most Brazilians still buy the majority of their groceries monthly as a remnant of this time. But this wasn’t limited to Brazil – further south in Argentina citizens have been battling currency controls and forex account seizures dating back to the early 2000s. Annual inflation rates are still over 80% today and the US dollar has become an everyday part of life when it comes to protecting wealth.

As LATAM and other emerging regions become hotbeds for crypto adoption and we likely go through new currency and debt crises following this period of high inflation – we must learn lessons from history and ensure not only that crypto is adopted but its self-custodial benefits are too.

How We Scale Self Custody

A common argument against self-custody is that exchanges are better at custodying than users are. While it is true that exchanges have enormously improved compared to the early days where the next Mt.Gox always seemed right around the corner – the same can be said of the security, user experience, and feature set of self-custody wallets.

While many early wallets like Trust Wallet still require you to write your seed phrase down on a piece of paper, there has been more innovation in the space as of late. It’s likely the next billion users to the space won’t need to ever see their seed phrase at all.

Wallets like Minke and Rainbow allow you to encrypt your seed phrase in your device’s secure enclave and on the cloud, offering a smoother onboarding experience for new users and a reliable backup incase of device loss.

Smart Contract wallets have also been gaining popularity of late, though they are hard to scale given higher gas fees. While 10 cent fees may seem fantastic in the West, in most emerging markets its a significant barrier to entry if crypto is to be used as more than an investment. The implementation of Account Abstraction likely solves the gas fee problem in the near future, however the technical blockers for multichain support remain.

Our best hope likely lies in the further development of Multi Party Computational technology otherwise known as MPC. With MPC a shard of your key is split between yourself and a third party in order to assist in recovery in the case you lock yourself out of your wallet. Some variations today require KYC with an exchange and others are experimenting with other forms of biometric identification. While KYC could remain a barrier to entry and seems contrary to crypto’s original ethos, the UX of biometric identification is improving and looks the most promising. Importantly, MPC wallets will also be multichain. With the adoption of certain L1 and L2s varying greatly by country, multichain support is critical if we are to achieve mass adoption.

Outside of private key management and its technical intricacies, it is likely that the feature set within self-custodial wallets will make them superior products in the future. Gone are the days of early wallets like Jaxx where all you could do was send and receive. Thanks to DeFi, most modern wallets are on-par with exchanges when it comes to trading and staking features. Elegant smart contracts and token approvals can also make spending crypto from your wallet as easy as cash (coming soon to Minke).

Over the past couple years we saw the fun of flipping and showing off NFTs, and how it brought a novel use case that required self-custody. With it came a wave of users new to not only wallets but investing as a whole, many of them had never invested in crypto or even equities before. With more innovation in DeFi and GameFi blossoming even throughout this downturn, it’s likely the novel new ways to invest and earn money will be self-custody first.

The full decentralization of money is the most impactful change blockchain technology can have on this world. If we are to achieve this feat we must learn from history and build towards a bright future in which self-custody is the default.

If you’re looking for the best way to self-custody your crypto and eventually use your stablecoins like cash you should download Minke and join us on the journey to making self-custody the default a reality.